If you’re a beginning writer, I want to start by asking: how much of an audience do you have right now? When working on a story, it’s easy to get totally obsessed with it. You end up churning out ideas, outlines, several plot ideas, and even several drafts without doing anything else. If you do this, your dedication is epic! But you also might want to think about growing your audience on social media and your blog (if you have one.) That way, when your story gets published, you’ll be in a much better position to promote it and sell more copies. Best of all, you’ll feel even more like your efforts were worth it.

Growing my audience is what I’ve been trying to do lately, so I wanted to share some great tips I’ve learned. Twitter’s my favorite right now, so I’ve been focusing my efforts there. You can get more followers on Twitter for free, too! Here’s how:

This means choosing a good, tasteful profile picture of yourself (or a cartoon version of yourself) smiling. Pick a good, tasteful banner photo that you either like or one that fits your brand. It could even promote any works you’ve done if you have any!

Fill out your bio, too. It should concisely describe you and your work in an interesting way. Include mentions of other accounts you have if you want to. Add a link to the home page of your website/blog, and make sure the link works! You can even fill out your birthday, too, if you don’t mind having it visible. (I only have mine so only the month and day is public.)

Something else to note: when you create a brand-new Twitter profile, the username it starts with (which starts with the “@” symbol) has your Twitter name and several random numbers. More often than not, profiles that still have their usernames like this are suspected to be spam accounts – especially if they still have the default profile picture and banner. (And often they’re right.) You can avoid this easily by going to Settings and Privacy, then Account, and then Username. The best ideas for your username are your first and last name or your website name (if it’s not your name.) Just make sure you really like your new username before you choose it.

Once you’re done with this initial polishing, your profile will look complete and genuine, and give a much better impression of you. This will encourage people to follow you – as long as you put yourself out there. Which brings me to this: 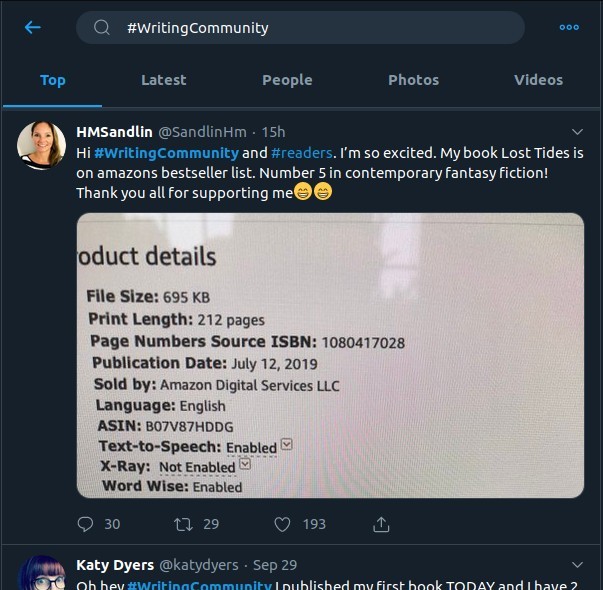 Just having an account and tweeting on it isn’t enough. The less followers you have, the fewer views and other engagements your tweets will get – especially if you have zero followers! What you really need to do is find and engage with your audience on Twitter.

For me, as a budding adventure writer, that leads me to places like #WritingCommunity, #amwriting, #writerslife, and other such hashtags to engage with other learning writers. I’ll also follow authors that write adventure (or similar to it – I’ve found most adventure these days is mixed with other genres like fantasy, supernatural horror, and others.) I’ve followed Stephen King, J.K. Rowling, a J.R.R. Tolkien fan page, and pages made for classic authors like Roald Dahl. Whatever relevant pages you follow, make sure they have active followings replying to their posts, and engage.

Make it a goal to tweet and like/reply to at least one post a day. I’ve failed a lot at this lately, but it’s just a matter of setting your mind to it and doing it. And it should be fun! Share your thoughts and what you’ve learned in your tweets and in your replies (while staying on-topic.) Don’t spam people with promotions of your work – it doesn’t work and it just drives people away.

If you’re pretty shy like I am, don’t worry – if you just share your thoughts while being nice and honest, you should get good and useful feedback. If you do end up unintentionally posting something that upsets people, just apologize and delete it without excuses. People love seeing someone take responsibility for mistakes they make. And yes, feel free to report and block users that reply to or message you in an abusive or very creepy way. I’ve even seen authors block people for replying abusively to one of their followers. Call me crazy if you want, but I think that’s a great idea to curate a more civil audience and better discussions. Would those abusive/creepy people really buy and read your books, anyway? I don’t think they would. 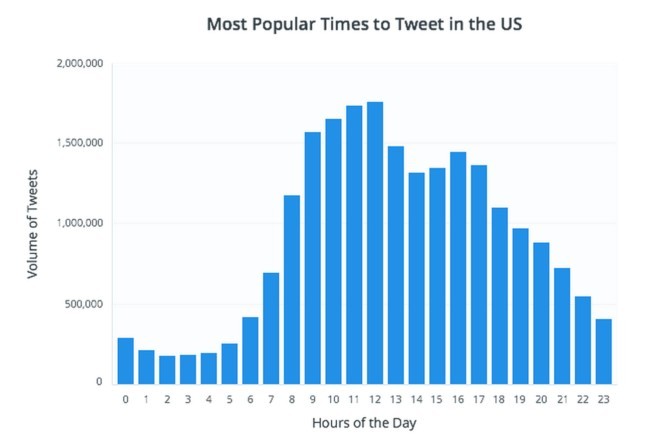 Yes, there really is a “best time” and day to tweet, according to this post from Buffer. While I encourage you to read the rest of it, the key takeaway from the article is that the most popular time to tweet is from 10 AM to 12 PM in your time zone. Hootsuite said pretty much the same thing, but added that the best days to post are from Monday to Wednesday. If you post consistently on these days and times, you’re much more likely to get engagement on your tweets, and more followers from it over time.

If you know you can’t always be around to manually tweet at that time, don’t worry! There are many ways to write your tweets and then schedule them to post at certain days and times. Tweetdeck is what I use, and it has a scheduling feature for new tweets. You can also try these other methods if that doesn’t work out.

It’s tempting to just pick any hashtag you think of and run with it. But what you want is to pick hashtags that are popular and a lot of people are searching right now. That’s how I came to find the #WritingCommunity, #amwriting, and then #writerslift (where writers will support each other by following each other and increasing each other’s follower count.)

I found #WritingCommunity through Hashtagify, which is a website that rates submitted hashtags’ popularity and whether it’s trending or not. As you can tell from the screencap above, it’s popular but not trending – there’s much more important news trending right now. Still, it’s great to use so your tweets gain more visibility – and net you more followers – among the writers’ crowd.

So I encourage trying things like Hashtagify. Try to find some popular (at least 50% popular, bonus if it’s trending!) hashtags to use, and include them in your tweets as much as possible. Don’t go overboard, though – try to use no more than three in a single tweet. Use the hashtags in the sentences in your tweet, like this example:

Because really, why would you go to all this effort to create an audience on Twitter if you’re just going to do something to get your account banned? All that hard work would be lost, utterly lost, overnight – and it’d be all your fault!

That’s why I encourage you to read Twitter’s rules. Most of it is common-sense stuff: Don’t post hateful or threatening speech, don’t harass people, don’t post a bunch of spam, etc. But there’s also lesser-known rules for automated accounts and things like that. Just think – and read the rules – before you post! Social media, with all its joys and benefits, can already be enough of a dumpster fire. Please don’t make it any worse!

Of course, I’ve also heard stories of people’s accounts getting suspended unfairly, or at least locked for “suspicious activity” unless you give them a phone number. You can get phone numbers from places like Google Voice and just give them that number. You can also appeal your suspension. If all else fails, if you have a big enough audience somewhere else, I suppose you could tell them about it so they can appeal to Twitter on your behalf. You just might have to concentrate your efforts on another social media network if that fails.

Other than that, have a great time on Twitter! Follow these tricks and others, and you’ll be rolling in followers in no time! When that time comes and you have a story published, too, you could even become verified on Twitter.

So what do you think? Are there other strategies you use to gain more followers on Twitter? Share them below!

I have a mailing list now, too! You can get my latest posts straight to your inbox, and a random email now and then. Just sign up under the “Get Adventure Writing Tips” section on the top right. Thanks for your time!